***This is a long post, mostly because I want to record it all for my son. 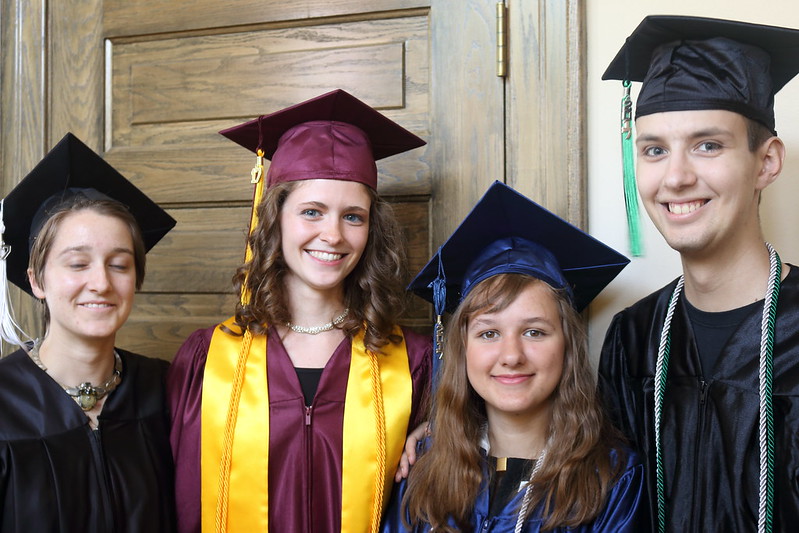 Sidney graduated with four friends he has known for years at the Historic Burke County Courthouse.  It was small and intimate celebration.  Our programs included the grad’s photos, bios, and the order of ceremony.

Sidney’s bio in the program:

Sidney Louis Gaskins, III came into the world 6 weeks ahead of schedule; he couldn’t breathe on his own.  But his parents always felt lucky; Sidney was the largest by far of all the babies in neo-natal intensive care.

Growing up, he wouldn’t be alone.  He knew nothing of strangers; everyone was a friend. . . to talk to, to ask questions, to tell stories.  A day spent with young Sidney was an exhausting day.  But his mother felt lucky . . . because he cared for others; he wanted to know them.

He could be scolded and spanked, but nothing tortured the child more than being left to be quiet, by himself.  His dad always felt lucky . . . because after the discipline, it was all new with Sidney.  No hard feelings.  He seemed to understand forgiveness and renewal.

He was a big brother.  We know big brothers aren’t always completely kind.  But his younger brother and sisters must have felt lucky . . . because he learned, and grew into a protector, a nurturer, a benefactor.

At 17, Sidney faced cancer . . . in his brain, in his lungs.  He seemed to feel lucky, that it was him instead of his youngers that would face it.  He felt lucky as he walked the halls at St. Jude.  Though far from home, he was so loved by so many.  That love made him stronger, lightened his burden.  It enabled him to lift others.  Sidney made it his personal goal to make someone smile every day.

Sidney wants to share his good fortune.  After taking a year to recuperate, he will go to college, focusing on child development classes, maybe have some fun in chemistry classes.  He plans to be a Child Life Specialist, working in hospitals to make sick children smile.

Lincoln played a cello prelude.  After the commencement speech, we spotlighted each graduate with a personal slideshow of childhood photos, followed by parents’ message and presentation of diploma.

I include Sidney’s 7 minute slideshow below.  I had so much fun putting it together, and it was a good, therapeutic, letting-go activity.

After his slideshow, Sid and I stood up with Sidney in his cap and down.  I was shaky but determined that I would do this thing.  I had my words written out as I did not trust myself to remember all I wanted to say midst the emotion of the moment.  I stuck fairly close to my script . . .

Back in our day, when your father and I were in school, education meant a good job, good money.  It meant not working in the furniture factory . . . or digging ditches . . .(I look at Sid, my ditchdigger husband)

Our education was about competition, comparison, being better than our classmates.  We competed for the best colleges, the best scholarships.

We feared that there was not enough to go around, so we had to get ours while we could.

With you, I wanted something different.  I had a vague idea that your education could teach that you are not the most important person in the world.   It could teach kindness, how to make good judgments for your own life and actions but to not judge others harshly, to be merciful and loving of your neighbor.

Especially when your neighbor is different from you.

I was not a great example of this myself, though I wanted to be.  I had no idea how to teach these things.  I still don’t, really.   I fell back into that comparison/competition trap many times, but You . . . You would have none of it.

You see the world as an abundant place with plenty for everyone and you approach relationships accordingly.  I learned from you.   I, your teacher, had to learn again and again to trust the Father’s Spirit in You,

to trust YOU Sidney,

to believe that you would make GOOD.

And you have made so much Good, Sidney.  You have a kindness that runs deeper than the ocean.  A heart that looks for the lonely and awkward.  You seek to serve.  You want to make people happy.

I saw this again and again at St. Jude.  Not a single day went by in which a stranger did not approach me with “You are Sidney’s mom, aren’t you?”  And then he or she would tell me how kind you are, how easy you are to talk to, how you explained what their little one felt inside the radiation machine, assuring parents that there was no pain.

I remember one shy young lady, in particular.  It was the end of a long day at the hospital and both of us were dragging our feet.  As you lost muscle and energy, your steps often dragged.  So we had shuffled past this girl in the waiting room, on our way to get food and rest.  We had turned a corner and you grabbed my arm and said, “Wait Mom.  There is something that I’ve got to do.”

You shuffled quickly back into the waiting room, positioning yourself in front of the young lady’s chair.  Pretending to hold a microphone and doing a tired, shuffling dance, you sang “What Makes You Beautiful.”

I watched her tired face smile and others in the waiting room laughed.  You had spoken with this girl previously, and she had shared with you her Make-A-Wish request — a concert and face-to-face meeting with the band, One Direction, who sing the song “What Makes You Beautiful.”

You wanted her to get her wish.  You wanted to encourage her.  You made her smile.

None of these things are likely to win you accolades, to make you a leader in your field, or to make you rich.

But standing here today, I say to you with every pulse in my veins . . .

Sid does not write his speeches.  He just went with the moment, not knowing what I planned to say.  But I asked him to write down what he remembered later . . .

When Sidney was very young… not an infant, but not yet a toddler… too young to talk, he got sick.  We had somewhat of a 3-day rule, if you’re sick for 3 days, and it’s not getting better, it’s time to go see the doctor.  So we took him in.

The doctor asked what was wrong with him.  We told him Sidney felt terrible.  And Sidney had this thing he was bad to do.  Certain faces he found very funny.  As soon as we told the doctor that Sidney wasn’t feeling well, Sidney broke out into laughter.  Not just chuckles… big, deep laughing, the kind where it’s hard to breathe, you’re laughing so hard.

The doctor went in closer with a stethoscope, and Sidney took it up about 3 notches, laughing that much harder.  I really thought he might choke and suffocate, he was laughing so hard.  Meanwhile, Tina and I tried to convince the doctor that he didn’t feel well…

I was reminded of that just this past year, when the Lenoir newspaper did an article about Sidney.  The headline said, “Local Teen Battles Rare Form of Cancer.”  And they had a picture of Sidney; he didn’t look like he was battling anything… big smile, happy face.  He had no hair, but other than that, you’d never know from the picture that Sidney had any troubles at all.

That’s just the way Sidney has always been.  It’s not that he stifles his pain, or pushes it out of sight… in an unhealthy way.  It’s like Sidney accepts his struggles, but he confronts them, as if to say to them, “YOU WILL HAVE TO LEARN TO LIVE ALONGSIDE MY JOY!” (tears streaming down Sid’s face)

When Sidney was young, I hoped and prayed that he would have an amazing extraordinary life.  This past year, it changed.  With all the cutting open of my son’s brain, and the radiation and chemotherapy, I just prayed that he could be normal.

Sidney, thank you for showing me that you could be both.  (tears, Sid and Tina hug Sidney, who is also crying)

Moments later, we pull ourselves together, and almost like an afterthought . . .

And also, here’s a diploma.

I wish we had videotaped it, but in the tense bustle of the day, Sid forgot to tell our daughter to record it — a major breakdown in our communications.  We should have planned the recording with our recording person a week or so in advance, so she could have reminded us when we were distracted.