Our Saanen doe kidded a few weeks ago, just as we were heading out the door to the Sunday morning service.  We all headed down to the barn instead and watched Jeanetta give birth to bucklings.

This is our third year watching the goats kid, and it is still a time of hopeful expectation.  The buckling below is about 2 hours old. 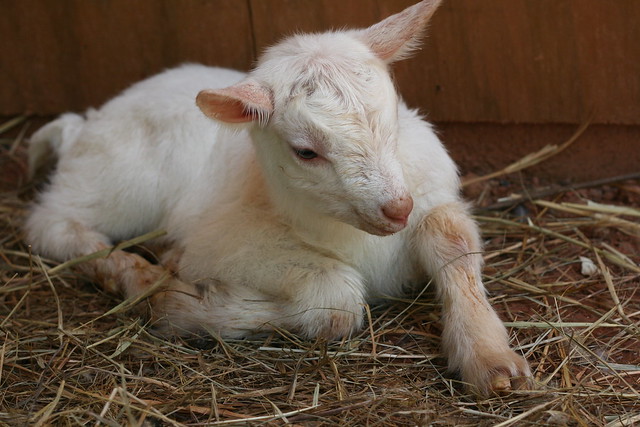 Lincoln’s rabbit had kits on Mother’s Day.  Lincoln sweet talks the baby, “Well, hello, Dinner #1.  You are growing up nice and meaty.  You’ll taste yummy on my plate.”

Our latest addition:  Lucy Belle, an 11-week old Pyrennees.  Right now, she is enthusiastic, clumsy and a delightful, entertaining nuisance to our outdoor work.  She will be a working dog when she grows up   —– guarding the chickens, rabbits and goats from predators like coyotes. 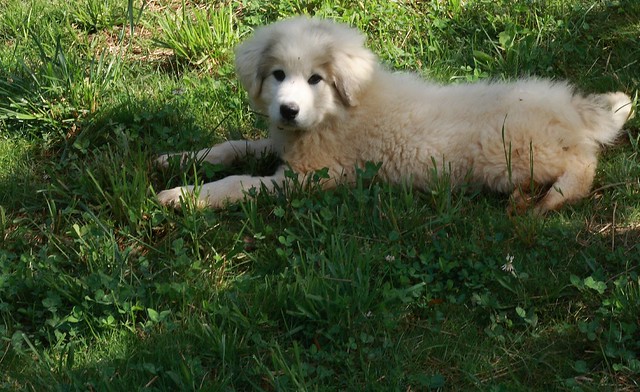 We are slowly making progress on the workshop/barn that we started over two years ago.

Sid, Lincoln and Rachel work on the attic level, while Sidney cuts boards below at the workshop level.  Beneath Sidney is a “basement” that will serve as the barn for the goats and Prairie’s imaginary horse.

Sid didn’t think the roof pitch was all that steep until he tried standing on it.  It didn’t take him long to determine that a harness was necessary.  Sidney, our 14 yo son, is working on the roof below.

Sid hangs over the roof on the backside, rolling out roofing felt.

Here is a wider view of the backside.  The goat’s entrance into their barn can be seen below.

There will be space down there for the goats to lounge, chew the cud, regurgitate and share bawdy jokes.  Well, Gegi, Jeanetta and Daphne are too ladylike for bawdy jokes, but I have strong suspicions about Helen.  She is a rebel goat.

It is my kids’ favorite time of year  —- when the weather cools, leaves are ablaze, autumn books and décor come out of storage, expectations of Thanksgiving run high.

And goat breeding is in process.

We own 4 does but no bucks.  Two of our does are Saanens and seasonal breeders who come into heat in the fall.  To encourage them to “get in the mood,” my kids must perform a rather unpleasant duty twice a day.  After the milkings and while our Saanens are still on their milking stand, the boys open a Ziploc baggie and allow the does to smell the stinky buck rag inside.  The unpleasant part is that the kids get a good whiff of that buck rag too.  It is unavoidable as the stench is so strong that it can be smelled BEFORE they even open the bag.

For those uneducated on goaty matters, a male goat is called a buck and he is a nasty, nasty creature.  He is quite odoriferous, in part because he enjoys urinating all over himself.  I have even seen bucks urinate on their faces and appear to drink it.  Female goats, which are called does, are much more sensible and appealing creatures, turning their delicate noses up at the nasty habits of their male counterparts.  Our does are clean animals, only getting dirty if we get behind clearing out their barn or if it rains a lot and there is mud and muck for them to wade through.

However, a doe’s weakness is her attraction to that bucky bouquet.  Since we don’t have a buck on the premises, we obtain a “buck rag” from a buck-owning friend, so we can carry that bucky balm back home with us and unleash it on our does .  As you have probably deduced, a buck rag is simply a rag that has been rubbed over a buck.  Once the scent has performed its magic and begins our does’ cycles, we haul them to our friend’s farm for breeding.  One hundred fifty days later, we get baby goats and milk.

So one morning last week, Lincoln comes in from the morning’s milking laughing about our doe, Gegi.  Sidney had milked her and then let her smell the buck rag while she was still on the milking stand.

I laughed to myself, imagining the look on the boys’ faces, if I revealed that I have always been entranced by their Dad’s scent.

an exceptionally large egg.  He weighed and compared it to an average sized egg.

Lincoln is our animal manager.  His siblings help, but he is the one who makes sure all animals are taken care of, and he likes to experiment with their care.  He has recently been feeding the chickens handfuls of rye berries because he read that rye is 10 percent protein.  His reasoning is that the chickens need added protein during the winter months when they aren’t eating loads of bugs.  Our egg production did increase within a few days, so maybe he is on to something.

And finally, we arrive at the climactic moment.

She has such a charming face.  Bony, beardy and rather triangular, but  possessed of a unique charm, nonetheless.

We have been carrying fresh water to the chickens twice a day.  The trek up and down the steep backyard is strenuous, and a few away-from-home days made keeping up with their water difficult at times.

This is where it is handy to have a man with heavy machinery, particularly DIGGING machinery.

Sid is digging a trench, a trench that will be laid with pipe and wire, pipe that will carry fresh water straight to the chicken coop and wire that will convey electric heat in winter.

And I didn’t even ask for these glorious conveniences.  Sometimes I feel bad because Sid never seems to stop working for me, but he insists that working around the house is relaxing to him.

Apparently, I do provide something in the way of entertainment though.  He pauses his digging here to watch his long-skirted wife straddling a 3 foot trench, while performing strange contortions to capture the perfect camera angle.

Coordination is not my stong point, and he knows it.  It is times like these that I’m glad he does not have a camera pointed at me.

Unveiling of the chicken estate is coming soon with a full tour of the watering and feeding system.  You will have to wait patiently along with me until he gets them done.