Both boys were in bed, settled in for the night.  I had just discovered that Sidney had done something he has been told repeatedly NOT to do — a very small thing, that has become an unconscious habit for him and my sweet verbal reminders (for I never nag . . . AHEM) were not fixing the problem.

“What did I tell you would happen the next time I discovered that you had done . . . . .?”  I asked with a devious smile.

“Oh noooooo” he lamented while his brother giggled.

“And Lincoln,” I said, “Lucy has escaped the goat pen.  Did you lock her up in the barn like I asked?”

Immediately, I knew the problem.  “Did you also  lay cinder blocks at the gate so she couldn’t dig out?  You know, like I asked you to do?”

But  I haven’t finished deriving as much pleasure as I can from the situation.  “Since it rained, it is muddy outside.  And since Lincoln did not lock up the dog the way he was told to do, Lucy is out.  She DUG her way out,” I emphasized gleefully.

The boys groaned.  Now, they were getting a clear picture of what it will be like to leave their comfy beds, pull on clothes to run around the house in the dark and wet with an overly exuberant  and large 5- month old muddy puppy running between their legs.

“You are a terrible mother,” Sidney declared.

Lincoln giggled.  Then Sidney’s face cracked and he started to laugh.

“Oh, I just love hearing that.  Say it again, please,” I mock-pleaded.

“You are a terrible mother.”

“You are a TERR-ible mother.”  Sidney laughed.

“I must be.  Because every time I hand out punishments, you boys don’t really seem to be suffering consequences.  You rather seem to enjoy it.  I must give terrible punishments.”

Moments later, I smiled contentedly as I hear the boys outside running, talking to each other and the pup, yelling their numbers as they run by.

I am truly blessed.

Lincoln carries water to the garden. 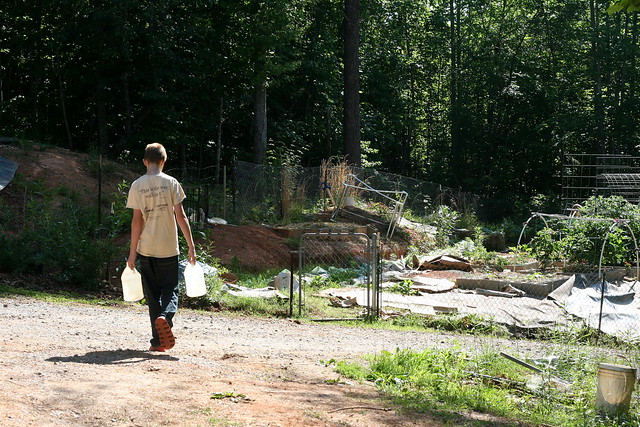 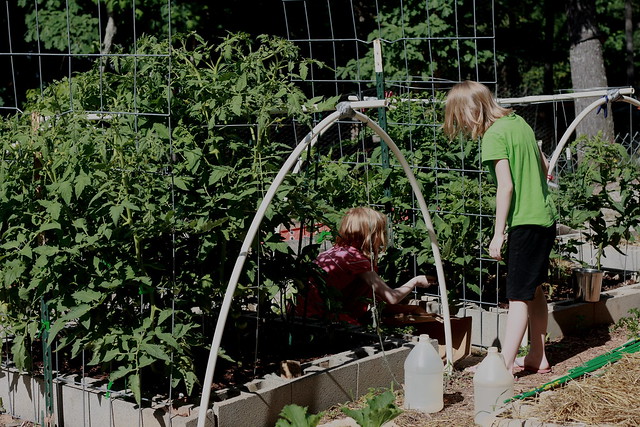 She even got the root. 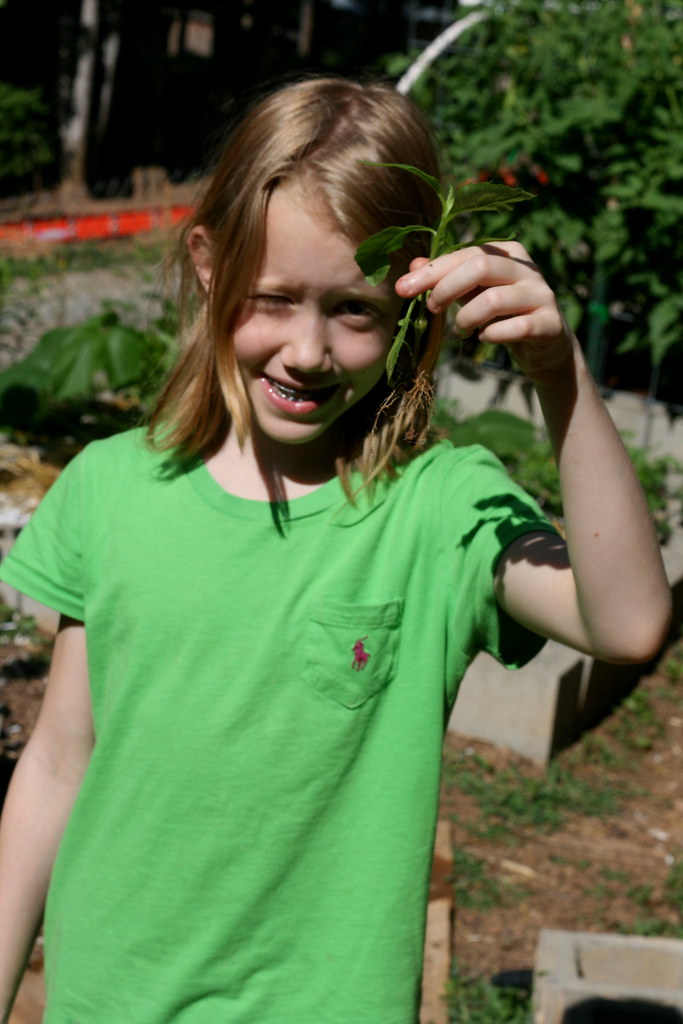 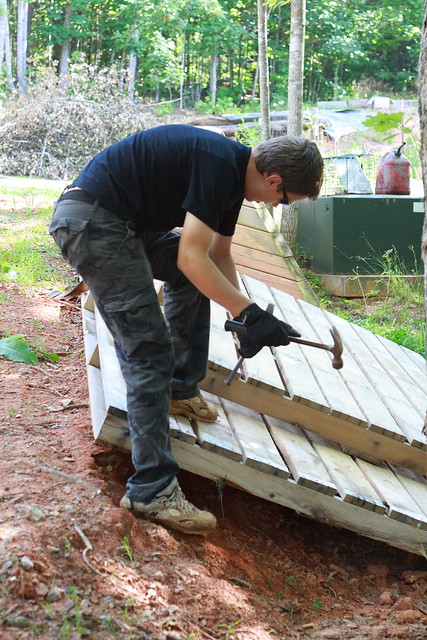 well, I can’t tell you what he is going to make, dear Reader. 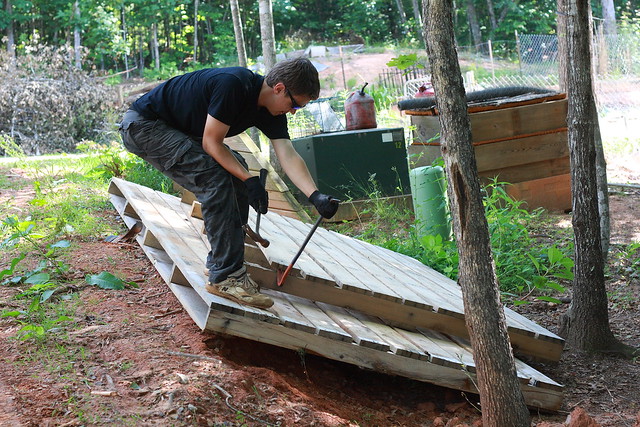 It is a secret for everyone except Lincoln, Rachel, Prairie and me.  That leaves Sid out of the loop.  It is kind of a surprise for Sid.

I didn’t have all the details mapped out for our parenting and homeschooling, but I made the decision early on that organized team sports would not play a role in our lives.  Organized team sports are not inherently wrong, of course.  Time with my children just felt precious.  And short.  And there are so many, many things we want to experience with them before they grow to adulthood and leave our home.  Regular team practice seemed like an interruption and a vacuum of our family time.

However, on this Saturday morning, when I am usually baking bread and catching up my To Do List,  I went to soccer practice.

I sat in the morning sun and watched my 3 guys on the field  —– Sid, Sidney, and Lincoln.  Sid has discovered that coaching soccer is fun and relaxing to him.  Sidney and Lincoln are slowly learning their power.  These untrained-in-sports boys are figuring out that they actually matter on the field, that what they do and don’t do influences outcomes.  I, the completely sports-disinterested woman, am discovering the joy of watching the metamorphosis of my boys on the soccer field.

While I watched Sidney learn that he is a force to be reckoned with, my Prairie runs up to me, “I have been on an adventure!” she says.  “And I brought you presents.”  I hold out my hand and receive the gifts of a rock, moss and a tiny pear.

She runs off again to “climb mountains” with her sister, Rachel.  I watch the girls run up and down the steep hill, wishing I had my camera to capture the image of  these fleet-footed fairies.  One graceful, red-haired fairy girl ran down the hill and across the field, leaping and jumping, chasing a dragonfly.

I turn my head and see Lincoln block the ball, sending it down the field in the opposite direction —- and I remember that his scoliosis has dramatically improved since starting soccer.  The chiropractor said the best thing Lincoln could do is exercise, exercise, exercise.

The sky is blue.  The grass is green.  The air is warm.  My boys are playing hard with their coach Dad, while my girls have their own “adventures” on the sidelines.  And I sit here doing absolutely nothing except breathing, watching  . . . . . . .and delighting in my children.   The manly coach is delightful in a different way.

This is the best Saturday morning I have had in a long time.

I never thought I would become a soccer mom.  It isn’t at all what I thought it would be.

My 12 yo son and I had a misunderstanding today.

I did not yell.  My voice was calm and controlled.  But Sidney can read between the lines.  And he can detect tone, even subtle tones and undercurrents.

Thankfully, he is also wise.  Wise enough to show his hurt and frustration.  In a respectful way, of course.  But in a way that made the whole misunderstanding crystal clear.

I apologized.  With excuses, I am sorry to say.  And we worked things out.  On the surface.

The incident weighed on my heart and would not release me.  Fifteen minutes later, I came up behind him and put my arms around him.  “I am sorry that I misunderstood you.  It seems like your personality and mine . . . . . . . . .clash a lot.  I think you are an awesome kid, but I sure don’t do a good job of showing that much.”

Sidney is looking over my shoulder, watching a fragile hummingbird and an angry yellow jacket duel over the nourishment in the feeder.   The yellow jacket circles the feeder on his insect legs, around and around, guarding the gold.  The hummingbird darts here and there, trying to take a sip, but always interrupted by the threatening wasp.

Sidney responds, “Speaking of clashing, I am sitting here watching that hummingbird try to drink from the feeder and that yellow jacket trying to chase him off.”

“I guess I would be the one with the stinger,” I say, trying to redeem myself with humor.

With his trademark dry humor, he says, “And there I am just trying to eat my lunch.”

We laugh and both feel better.

Now, I just need to work on removing my stinger.

I planted a seed and did  little to encourage it to grow.

First, we showed the children this clip from Annie Get Your Gun.

Parents, please review before showing to children.  The pictures in the sidebar are not always appropriate.****

Then, we watched the whole movie later.  In recent weeks, we have also watched Seven Brides for Seven Brothers and The Sound of Music again.  Then I kind of jokingly suggested that there should be no arguments in our house that are not sung.

There were a few laughing reminders “Children, you are not singing.”  And Sid and I sang a few silly arguments.  But all was done in a joking manner.  No hard rules were laid down.

Then last week I overheard the boys talking.  It sounded like they were slipping into an argument.  Note that my definition of an argument is about any contradiction of another person that has little purpose or value.  I think most contradictions, even gentle ones, stem from the contradictor’s pride and desire to be “right.”  I’m kind of picky about it, but I like for the kids to recognize their motivations BEFORE it ever gets to the point of a heated, raised voice.

Just as I was about to draw the boys’ attention to the direction their conversation was going, they broke into song . . . . . .  . .

And this week the girls have sung arguments over whether Rachel is allowed to remove knives from the dishwasher and who was going to use the dustpan to sweep up their chocolate zucchini muffin crumbs from the floor.

I think they get it.

Although, I think there will be more arguments in the house now.  They are finding it too much fun to argue in song, and with such sweet, charming voices raised, I can hardly complain about that.