Over the years, I received many birthday cards from Grandma Louise, most of which have the words “You are special” written in her spidery handwriting.  I bet she wrote that in all the birthday cards she sent.  Though it is tempting to dismiss those often-written words, I see Grandma’s truth more clearly when I look at the picture below. 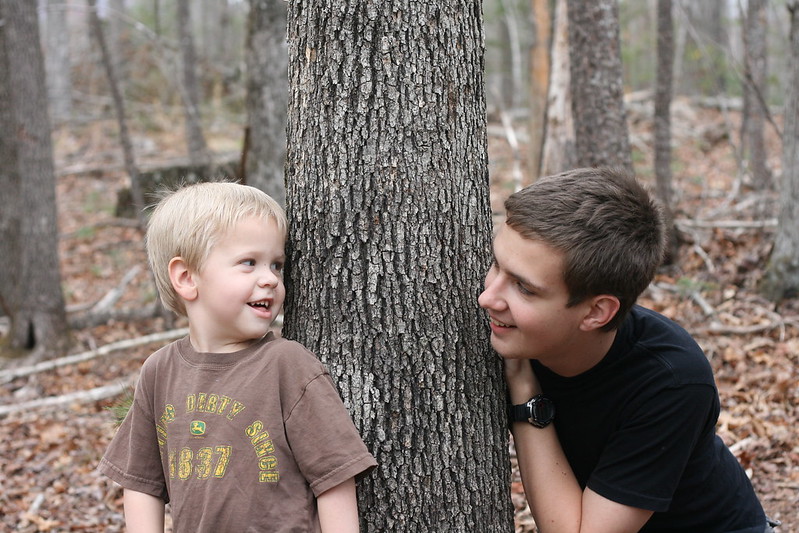 Really now.  They ARE special.

Wesley and Sidney, cousins and Grandmother Louise’s great-grandsons, peek at each around a tree.  I am sure both boys have birthday cards tucked away in shoeboxes with Grandma’s words “you are special” written on them.

The above picture and the ones following were taken the day of her funeral. 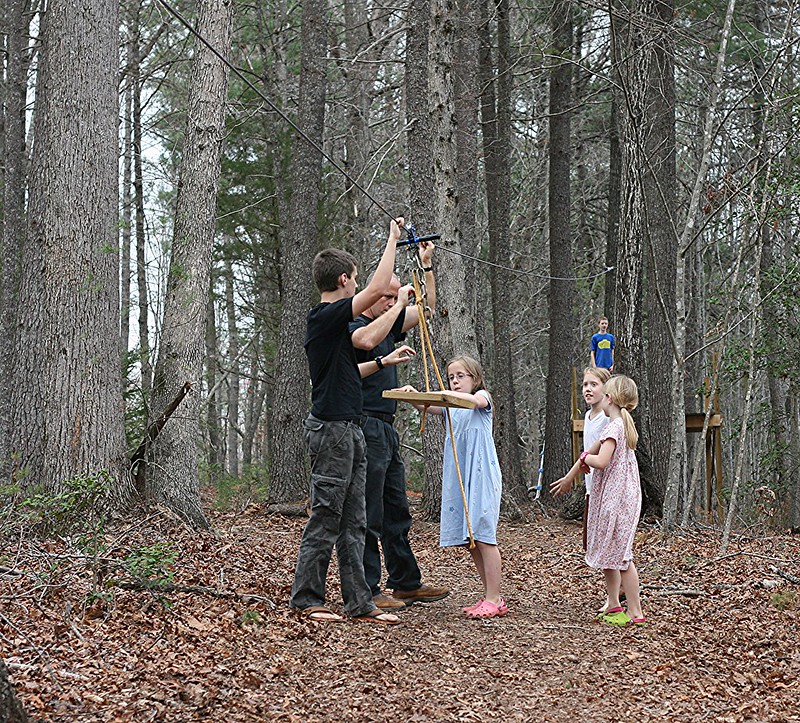 A few relatives followed us home from the church service to try out the zipline.  Aunt Carla, mother of 6, takes the COOL & BRAVE MOM award for daring the ride. 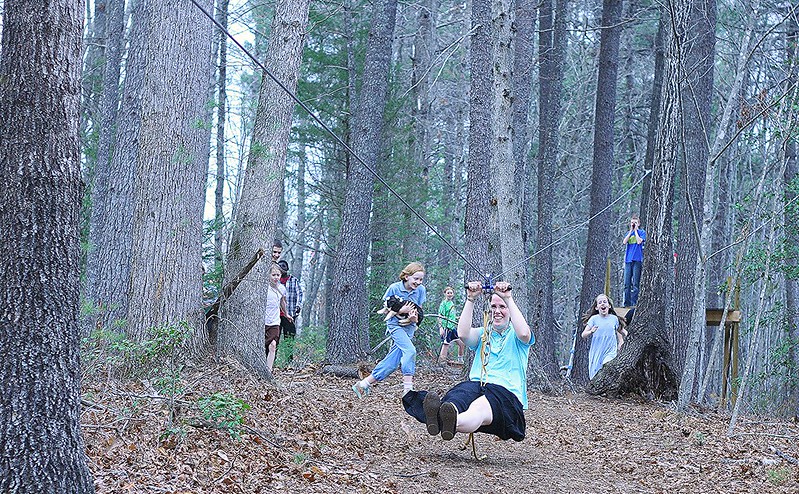 Though wee Ada was perturbed to have to stay with Aunt Rita while her Mom rode. 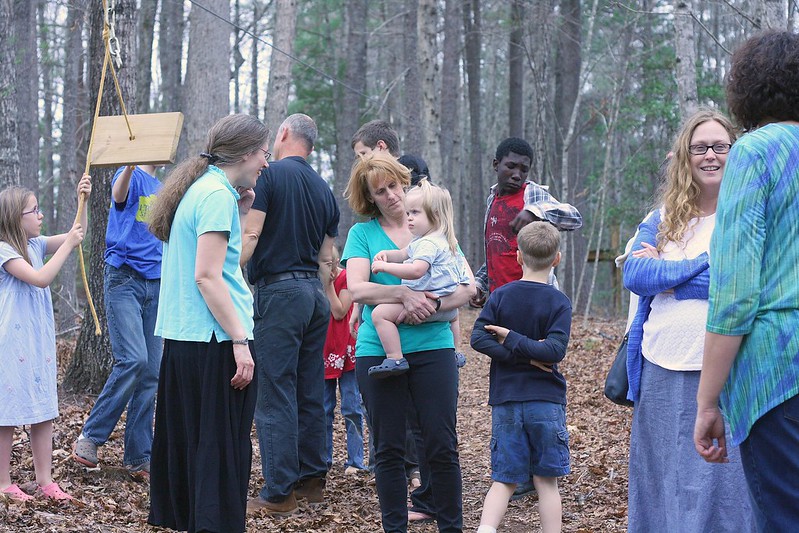 Ada did brave the chaos of a mob of relatives to explore on her own for a bit, but a fall in the woods had her wanting her Mama.  Thankfully, big cousin Sidney was there to walk her back. 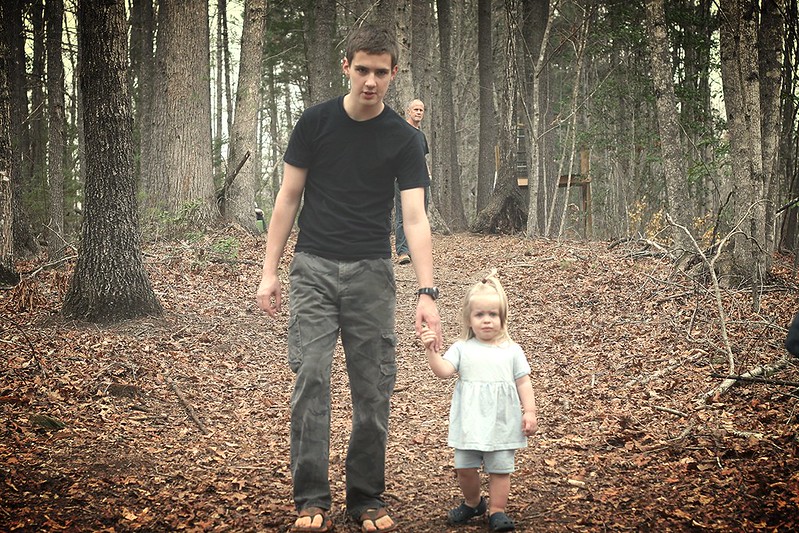 It seemed like a good idea to get a picture of some siblings and a cousin from the opposite coast. 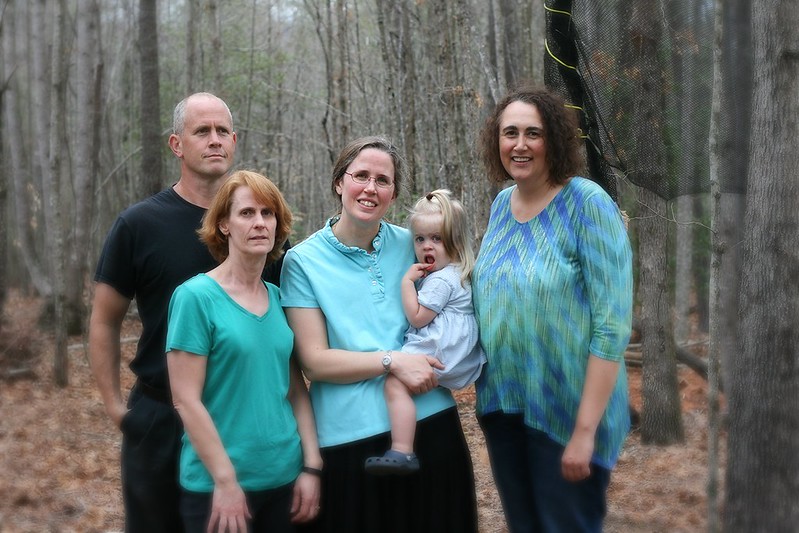 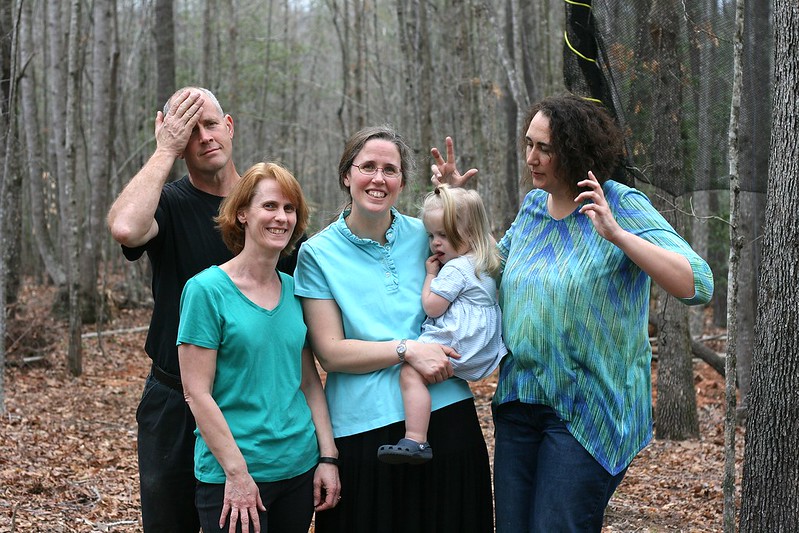 But they got unruly. 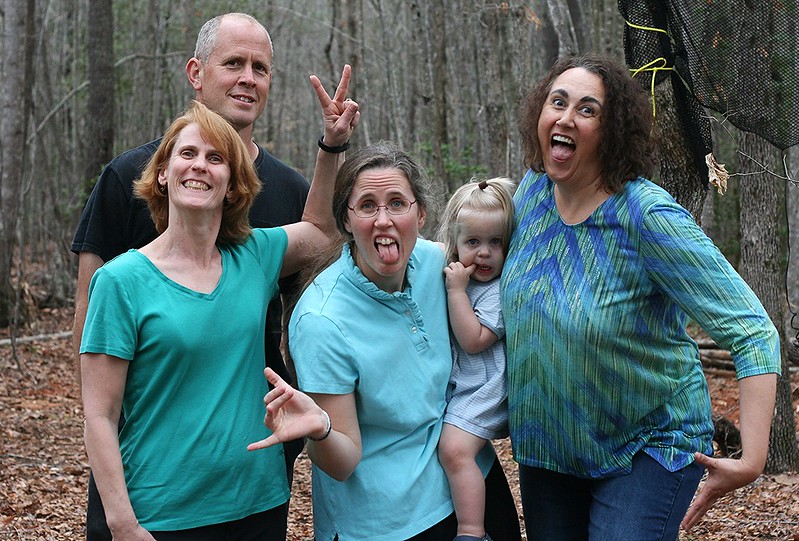 Hmmm . . . . maybe Grandma Louise meant something different when she told these people they were “special.”  I bet she put it in quotes like that.  Hey y’all, I want to see your birthday cards from Grandma. 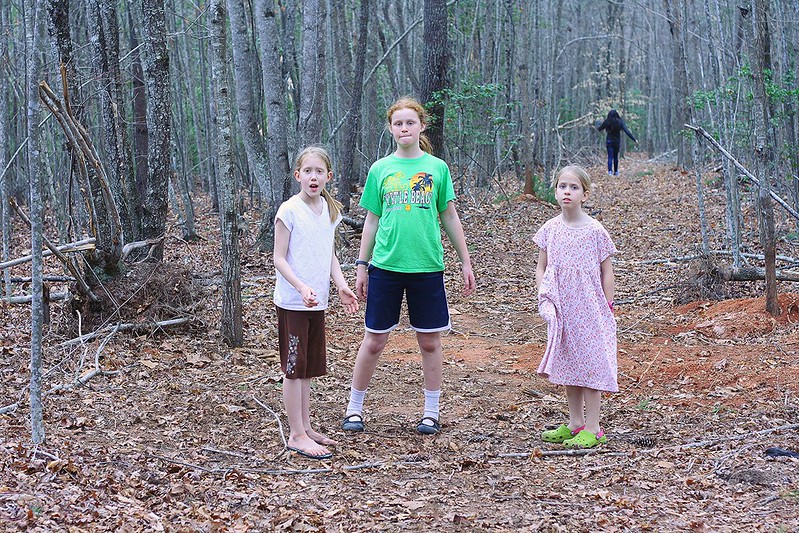 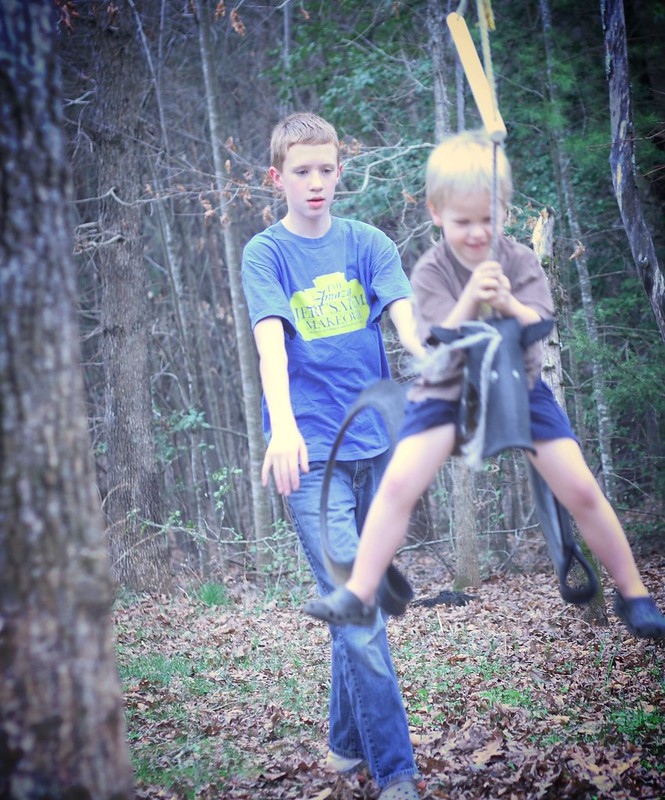 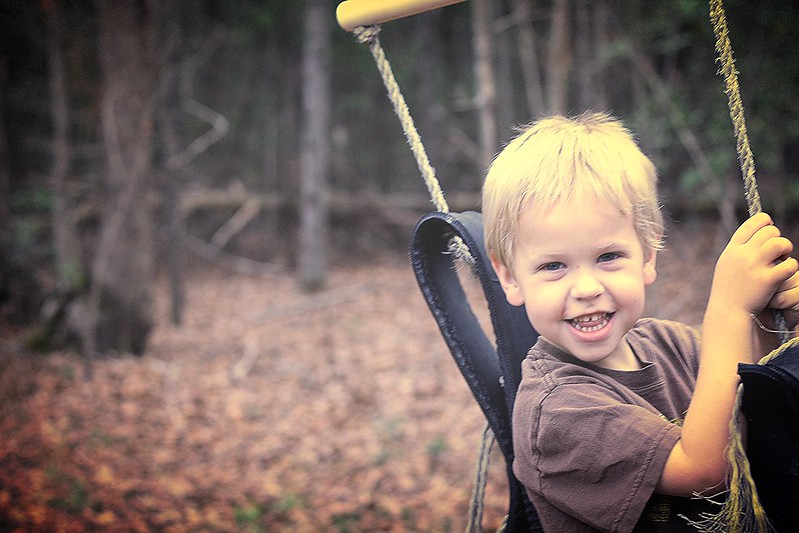 Wesley is special enough to get multiple pictures. 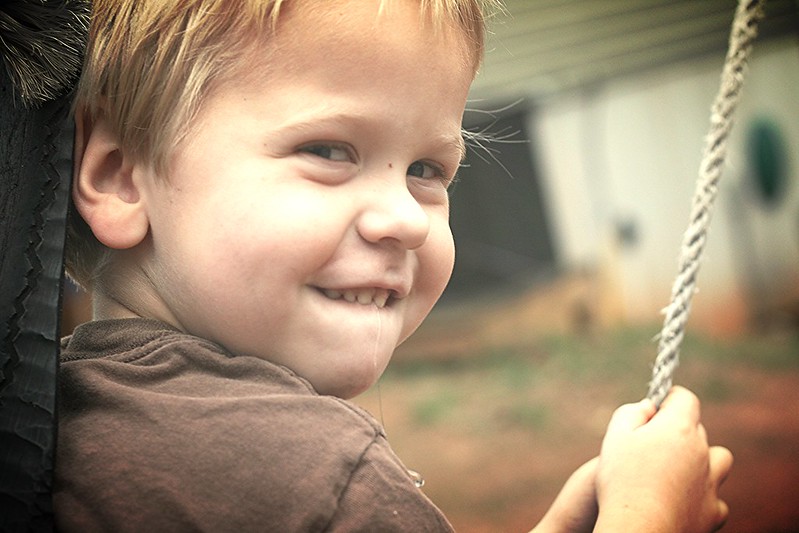 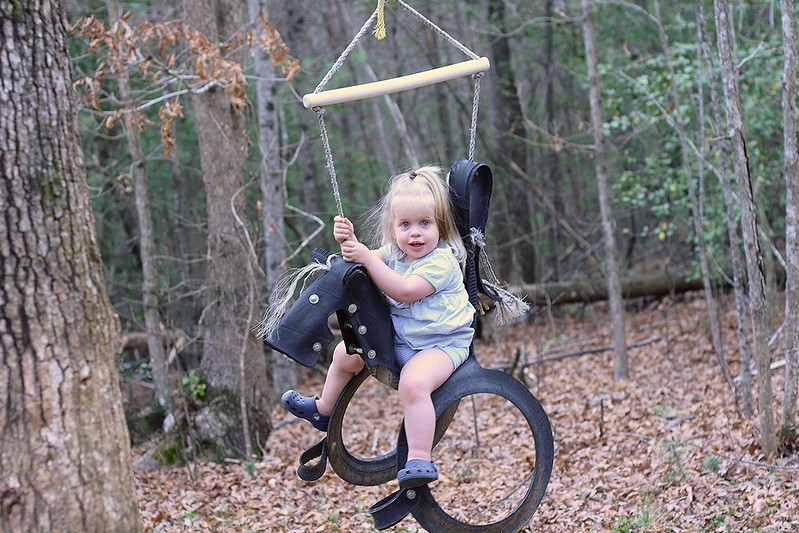 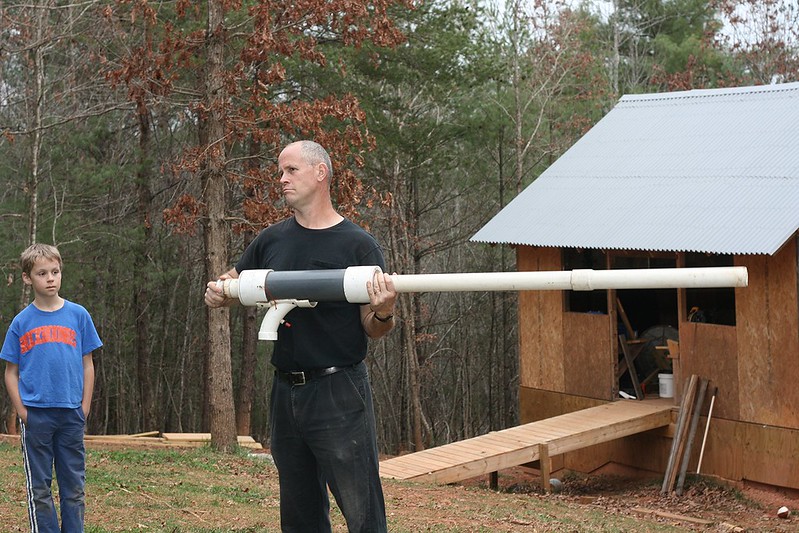 Sidney fires a potato into the side of an old barn. 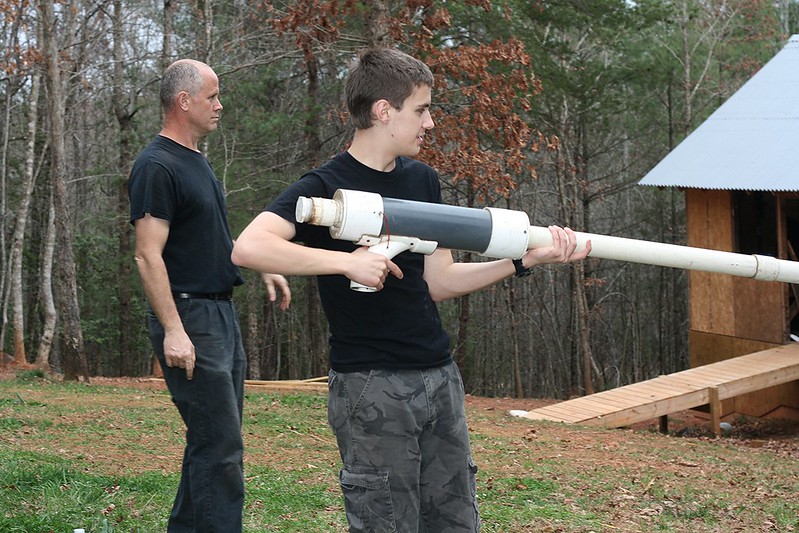 Prairie and Chloe, favorite cousins, though they almost look like sisters. 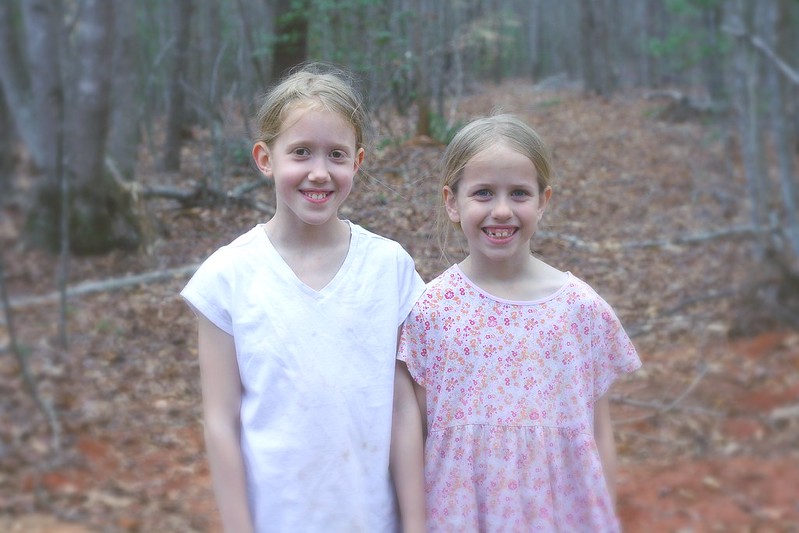 They called this their “silly face.” 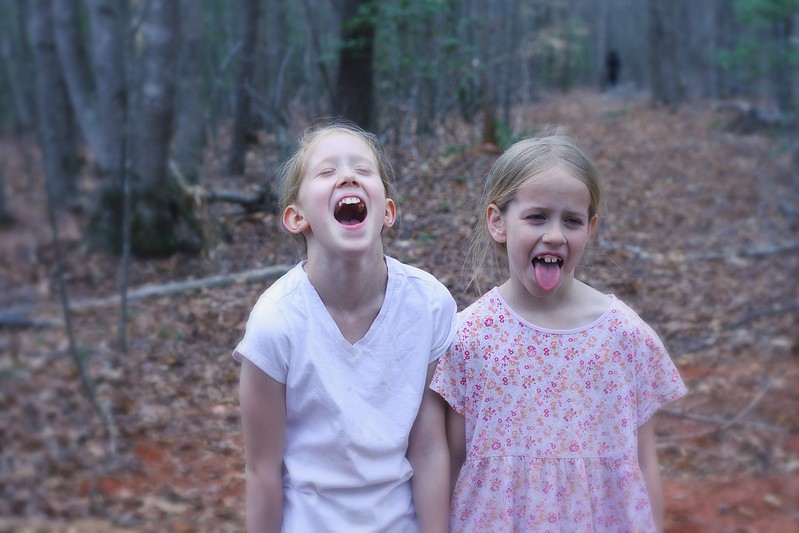 They begged me to take a picture of their “mad face.” 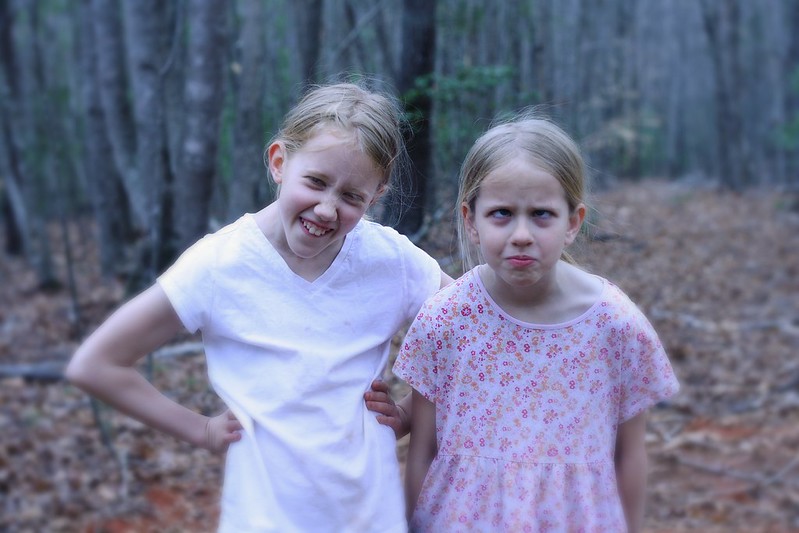 Would Grandma call these their “special faces”? 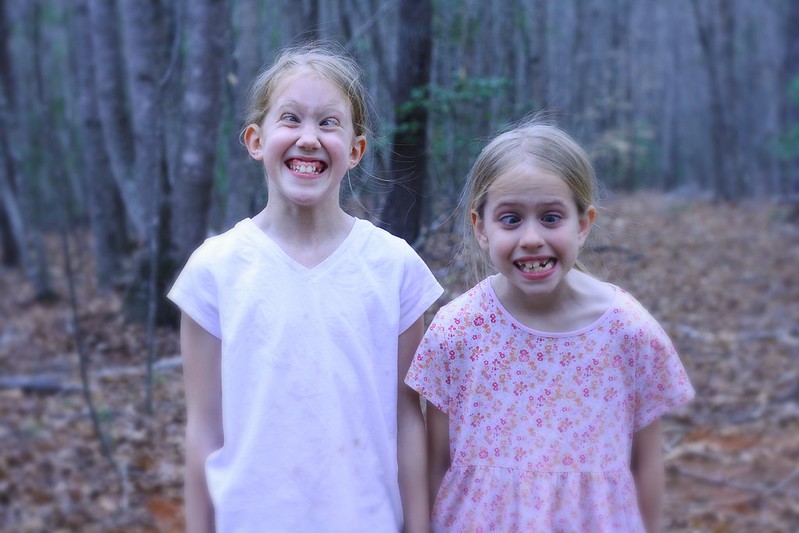 It was a special day.

In addition to the memorial service for Grandma, we got to be with family.  We met Sandra, a west coast cousin, whom I had always heard about but never met.  She came back to the house with us and we learned how delightful she is.

There were so many people that I didn’t photograph, so many daring, fun, “special” descendants of Grandma Louise.  It is hard to think of all these people and not believe that inclusion in her lineage is somehow special, a kind of chosen.  I am not a blood relation, but I feel so blessed to have been grafted into this family, to be connected to these kindred which sounds like and feels sacred.

I will always remember these people and this time as special, just like Grandma said.

This year, we drove to Durham for the annual Gaskins’ Thanksgiving.

No, wait . . . . . there was one thing new this year.  Or rather, a new cousin/niece/grandaughter  added to the family.

Knocker and Laura adopted a new daughter, Molly.  She just turned 14 and has just slipped right into the fold.

While I”m on the topic of latest happenings . . . . . . . . . . Josh and Sandra are engaged at this Thankgiving event.  Josh has been around for a few years, but very soon my kids will get to call him *Uncle* Josh, rather than Sandra’s Josh which was to distinguish him from Cousin Josh, who is Rita and Jeff”s son.  Whew!  Families can be complicated.

Prairie is blurred because she never sits still.  Laura took many pictures, and I think Prairie was slightly blurred in every one of them.  Kind of reminds me of someone else I know who rocks from side to side in bed at night until I kick him.  Then he wiggles a foot.  I kick.  Then he clicks his teeth together.  At which point, I stop kicking because I am too incredulous and by this time, fully awake.  And then . . . . . .oh, never mind . . . .I’m just saying Prairie inherited her jitteriness.

There are other Gaskins, but I couldn’t wrangle them up for a photo.

Well, I *could* have if I had nagged.

But I make it a policy to never nag.

Unless it is my husband.

Because he is special.

My nagging is the special husband privilege that he gets to keep exclusively to himself.

We veered off our usual school schedule to do other things today.  The boys wrote letters to a friend who joined the Marines a few weeks ago and who needs some encouragement and prayer.

And we did some very important Thanksgiving prep —-

We listed all the Gaskins members expected to attend the festivities and quizzed the kids on Who was Who in the clan.  They do well on the 21 “cousins,” but sometimes get a little fuzzy on the aunts and uncles, specifically which aunts/uncles are the sons and daughters of Grandpa and Grandma and which aunts/uncles are sons- and daughers-in-law.

Over lunch, we played a little Gaskins trivia.

“Lincoln, who was the first child born to Grandpa Louis and Grandma Sandy?”

“No, Daddy is the fourth child.”

“Lincoln, Sandra is the sixth and last child born to Louis and Sandy Gaskins.  The first child is 20 years older than Sandra.”

They never guessed Aunt Rita as the oldest.

“Who is Aunt Rita’s husband?

“How many kids do Uncle Jeff and Aunt Rita have and what are their names?”

“Sidney, who was the 3rd child born to Grandpa and Grandma?”

“Uncle Knocker.  Hey, Lincoln did you know that Knocker isn’t his real name?  His real name is Gary, his middle name is Adam and his initials spell GAG.”

Over supper, we reminisced over some family stories.

“Daddy, what does gourmet mean?”

“Gourmet refers to fancy food.  Caviar might be considered gourmet food.  Macaroni-and-cheese with hot dogs is NOT gourmet.  Uncle Jeff is a gourmet cook.  Aunt Rita is not.”

And because they have heard the story so many times, the kids instantly recalled the first meal Aunt Rita cooked for her new beau, Jeff.  Trying to impress him, she cooked her best —– macaroni-and cheese with cut-up hot dogs.  According to Sid, Jeff the gourmet was not impressed.

Now that I think about it.  I’ve never heard Uncle Jeff and Aunt Rita’s version of this story.  I wonder if it is different.

My kids definitely know that Uncle Knocker has a different version of the field-on-fire story.  According to him, Sid set that field on fire.  According to Sid, Knocker set it on fire.

Lincoln remembered that Cousin Sammy can burp anytime he wants to, which quite impressed him, until he realized that HE could pee anytime he wants to.  I could see the mental gears shifting in his brain has he quietly decided that HIS skill was definitely just as good as Sammy’s.

I’m sure the next few weeks will be filled with family stories as the anticipation of  THE RELATIVES COMING builds.

LATE-BREAKING NEWS (real news, not the made up kind you get on television)

Vinny and Marianna and their son, Giacomo are doing well.  They now live in Paris and Marianna is expecting another little one.  Vinny and Marianna were in the States last week.  I believe Vinny was attending some kind of conference for really smart mathematically- and statistically-inclined type people.  They were hoping to swing by North Carolina, but it didn’t work out.

Vinny sent us some pictures for a consolation prize.

Sorry.  I tried to post the pictures directly to my blog, but couldn’t quite figure it out.  Maybe Sid will be able to.